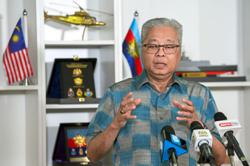 PETALING JAYA: One locality in Sabah will be placed under the enhanced movement control order (MCO) from Nov 10 until Nov 23, while it will be extended in several other areas around the country, says Datuk Seri Ismail Sabri Yaakob.

The Senior Minister said that Kg Sabah Baru in Lahad Datu, Sabah will be placed under the enhanced MCO because of a rise in Covid-19 cases there.

He said that until Nov 8, the Health Ministry had conducted 441 screenings, with 102 positive cases detected.

“This will make it easier for the ministry to conduct screenings as well as curbing the spread of the disease, ” he said during a press conference on Monday (Nov 9).

Ismail Sabri also said that the government will extend the enhanced MCO in Pangsapuri Mutiara Kasih and Taman Khazanah Indah in Lahad Datu, Sabah from Nov 10 to Nov 23 as there was still a rise in Covid-19 cases.

Both localities had been placed under the enhanced MCO since Oct 13.

Ismail Sabri added that the government would also extend the enhanced MCO at the Plaza Hentian Kajang in Selangor and at Putra Point in Nilai, Negri Sembilan from Nov 11 to Nov 24.

Similarly, the enhanced MCO in Kampung Haji Baki in Kuching, Sarawak will be extended from Nov 11 to Nov 24, but it could end earlier if there was no rise in cases in the locality.

Ismail Sabri explained that the enhanced MCO here was extended as the Health Ministry was still waiting for the results of the screening conducted.

He said that the enhanced MCO in Felda Umas in Kalabakan, Sabah and the Sg Emas flats in Kuala Langat, Selangor will end on Nov 9 and Nov 10 respectively.