MIRI: An Indonesian worker is believed to have been killed by a crocodile and his body torn in two by the reptile in a stream near a plywood factory in Kuala Baram industrial estate north of Miri city.

Fire and Rescue Department personnel retrieved his remains at 9.15am on Saturday (Oct 31).

There was only the head and shoulders as the rest of the body was missing.

The department, in its latest updates from the Lopeng Bomba Station, said the worker had been identified as Muhammad Nasution, 24.

It said it received a report from the plywood factory management about the missing worker on Friday afternoon (Oct 30).

The factory is located next to Sungai Bilat.

"Initial probe showed that the man tried to cross a stream from the factory to the other side to go buy things at a supermarket.

"He was walking along a water pipeline.

"A friend of his saw him being snatched by a crocodile while on the pipeline," said the department.

It also said the incident actually happened on the night of Oct 27 but the factory workers did not report it. Instead, they tried to search for the victim on their own.

They only called for help from Bomba Lopeng Station on Friday afternoon.

The remains have been handed over to the Miri police. 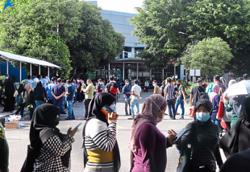