PETALING JAYA: Malaysia has condemned the attack in Nice, France, and called for those linked to the crime to be brought to justice, says Wisma Putra.

"We extend our condolences to the families of those killed, and wish those injured in the attack a speedy recovery.

"The attack yet again reminds the international community of the urgent need for a concerted effort to eliminate acts and threats of terrorism in a comprehensive and effective manner," the Foreign Ministry said in a statement on Friday (Oct 30).

"Evidently, this global menace recognises no boundaries, nor religious and racial affiliation. For any effort to be effective, all members of the international community should be united in addressing the root causes of terrorism and in promoting mutual respect, and harmonious and peaceful co-existence, while opposing persecution, provocation, prejudices, as well as religious or racial hatred," the ministry said.

On Thursday (Oct 29), a knife-wielding Tunisian man beheaded a woman and killed two other people in a church in Nice before being shot and taken away by police. 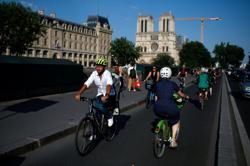