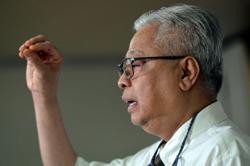 The Senior Minister (Security) said that of the total, 678 were issued compounds while ten were remanded.

The violations included not observing social distancing (213), not wearing face masks (211), failure to provide check-in facilities for customers (136), crossing state and districts under the conditional MCO without permission (37), and other violations (91).

Ismail Sabri said that the police-spearheaded taskforce monitoring SOP compliance conducted 53,974 checks across the country on Saturday, said Ismail in a statement on Sunday (Oct 25).

He added that the Construction Industry Development Board (CIDB) inspected 36 construction sites in the country, with 13 found to be complying with the SOP while 23 were not in operation.

Ismail Sabri also said that the Domestic Trade and Consumer Affairs Ministry conducted 943 checks on business premises, of which 935 were found to have complied with the SOP.

The other eight premises were advised to comply with the SOP.