KOTA KINABALU: Parti Bersatu Sabah (PBS) will not be contesting in its traditional Batu Sapi parliamentary seat in the by-election in December.

PBS president Datuk Seri Dr Maximus Ongkili said this was decided by the party’s political bureau during its meeting recently in light of the worsening Covid-19 situation in Sabah.

“Sabah continues to record the highest number of Covid-19 positive cases in the country. Our numbers hit three digits in the last few days, where on Sunday (Oct 18) alone, we recorded 702 new cases, ” he said on Tuesday (Oct 20).

He said due to the severity of the Covid-19 situation, PBS decided to back out from contesting in their stronghold seat.

“As a multiracial party, PBS has continued to enjoy a strong following and huge membership in Batu Sapi, ” Ongkili added.

The Minister in the Prime Minister’s Department (Sabah and Sarawak Affairs) said that PBS is also of the view that public safety and health of the Sandakan people and Batu Sapi voters should be the foremost consideration at this time.

Although it is not immediately known if other partners in the Gabungan Rakyat Sabah (GRS) will be contesting in the polls, he said that he has informed Perikatan Nasional president and GRS chief Tan Sri Muhyiddin Yassin that the party will support and assist any eventual Perikatan Plus candidate and ensure a win in the Batu Sapi by-election.

The Batu Sapi parliamentary seat was declared vacant following the death of its MP Datuk Liew Vui Keong of Parti Warisan Sabah due to a lung infection on Oct 2.

The Election Commission announced Nov 23 as nomination day, Dec 1 for early polls and Dec 5 for the by-election.

Other than PBS, Barisan Nasional, SAPP, Parti Cinta Sabah, Sabah STAR, and Sabah Pakatan comprising PKR, DAP and Amanah, have said that they would not be contesting in the polls. 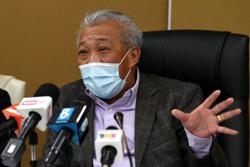