Tajuddin: Give Umno the DPM post and more ‘strategic’ ministries

KUALA LUMPUR: Umno should be given a deputy prime minister post and more strategic minister positions in the Perikatan Nasional government as it is the biggest contributor of seats in Parliament, says Datuk Seri Tajuddin Abdul Rahman.

"We contributed the highest number of seats in Parliament so maybe the deputy prime minister post should be given to us," the Umno supreme council member said on Friday (Oct 16).

He said Umno had not been given the due recognition it deserved despite contributing equally to the formation of the governing coalition.

He gave the example of Datuk Seri Azmin Ali and nine other MPs who left PKR to join Perikatan.

"Almost all of them were made ministers (or deputy ministers). Even PAS, which is a smaller party compared to Umno, was given important positions. This is causing dissatisfaction among Umno members.

Tajuddin said that Umno was not after "power for the sake of power", but this was to enable the party to better serve the people.

Asked to comment on his previous comment that Umno was considering throwing its support behind PKR president Datuk Seri Anwar Ibrahim, Tajuddin said this was a possibility if Umno's demands were not met by its Perikatan partners.

However, he insisted that the party was adamant it would not work with DAP.

"Umno made its stance known long ago that it would not work with anyone allied with DAP.

"Without DAP, we are willing to talk," he said after a walkabout to check on standard operating procedure compliance at the Masjid Jamek LRT station here.

Umno on Tuesday (Oct 13) announced that it would issue "fresh terms" to the Perikatan coalition if they were to continue their political cooperation formally in a written agreement.

Party secretary-general Datuk Seri Ahmad Maslan said the party would consider withdrawing its support for the governing coalition if these conditions were not met.

Tajuddin, however, rejected claims that the politicians were more preoccupied with politicking than the rakyat.

"The government has announced a lot of assistance for the financially burdened and the unemployed amid this Covid-19 crisis.

"The politics does not interfere with the government's ability to service the people," he said. 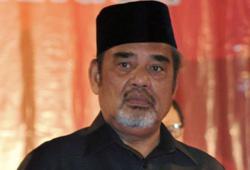 Tajuddin: Give Umno the DPM post and more ‘strategic’ ministries 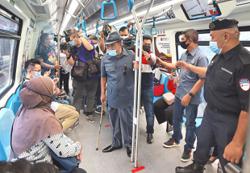