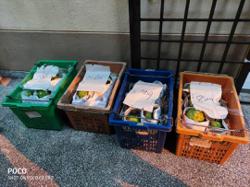 Imported red chillies seized in Johor for not fulfilling regulation

Guy really loves his bird’s nest soup, but Maqis has something to say about it

Maqis state director Nur Afifah A. Rahman said the container was detained at around 3pm on Thursday.

“Checks by Maqis officers at the location found that the consignment of red chillies from China was worth RM71,243 and meant for the local market.

“Further checks found that the chillies did not follow import regulations as stipulated by Maqis.

“The consignment did not have a phytosanitary certificate from the country of origin,” she said here yesterday.

Nur Afifah added that besides not having the certificate, the chillies also failed to follow the grading, packaging and labelling standards as stipulated under the 3P certification requirements.

She said Maqis seized the container and its contents for further action under Section 15(1) of the Malaysia Inspection and Quarantine Service Act 2011 (Act 728).

Nur Afifah said that Maqis was committed to carrying out inspection and enforcement at the country’s entry points to ensure that all agriculture produce entering Malaysia follow the rules and regulations set by the government.

In an unrelated case, the General Operation Force (GOF) detained a 43-year-old man for smuggling 192 bottles of liquor and 167 cartons of illicit cigarettes worth about RM44,056.

Its Simpang Renggam Fifth Battalion commanding officer Supt Dimin Awang said the suspect was detained at around 12.30pm on Thursday in front of a hypermarket along Jalan Tasek in Seri Alam here.

He said the items were found inside a Proton Wira and a Toyota Vios parked at the location.

“Initial investigations showed that the suspect used the two vehicles to store the cigarettes and liquor.

“The total value of the seized items, including the two cars, are RM111,056,” he said, adding that the suspect and the items were handed over to the police for further investigations. Imported red chillies seized in Johor for not fulfilling regulation Guy really loves his bird’s nest soup, but Maqis has something to say about it