Family members and friends paying their last respects after a religious ceremony for the late Batu Sapi MP Datuk VK Liew at his house in Kota Kinabalu.

KOTA KINABALU: Batu Sapi MP Datuk V.K. Liew was laid to rest at the Nirvana Memorial Park in Telipok about 25km from here on Monday (Oct 5).

Liew was given a funeral service by a Catholic priest at his home in Likas before he was taken on his final journey at 2.30pm to the memorial park.

The journey was delayed due to flooding along the road following heavy rains overnight.

The public had been requested not to attend the funeral service in view of current concerns over Covid-19 and to observe the standard operating procedure (SOP) on public gatherings.

He had been initially admitted to the Jesselton Medical Centre for a slip disc prior to the Sept 12 nomination day for Sabah election, and was transferred to the Gleneagles Hospital for further medical attention.

However, his condition took a turn for the worst when he was diagnosed with a lung infection and eventually succumbed to his illness on Oct 2.

Liew was previously the president of the Liberal Democratic Party (LDP) between 2006-2014 but was ousted in an internal power struggle.

He left the party to join Warisan in early 2018 and became the party’s successful candidate for Batu Sapi.

A by-election is expected to be held for Batu Sapi in the next 60 days as required under election laws.

He was the Warisan Plus election director but could not carry out his political work following his hospitalisation. 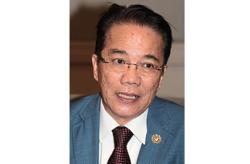