Sabah recorded the most number of new cases with 118, followed closely by Kedah with 98.

The Federal Territory of Kuala Lumpur recorded 14 cases, followed by Selangor with 13, Putrajaya (five), Terengganu (two), Perlis (two), Pahang (one), Penang (one) and Melaka (one).

Of the total number of cases, 31 involved those who had just returned from Sabah recently.

Only one of the new cases was imported, while the rest were local transmissions, Health director-general Tan Sri Dr Noor Hisham Abdullah said at the ministry’s Covid-19 press conference on Thursday (Oct 1).

The Tembok cluster in Kota Setar, Kedah, saw a rise in cases with 88 new infections. This brings the cluster's total number of cases to 91.

No fatalities were reported, which means the Covid-19 death toll in the country remains at 136.

Cumulatively, the country’s total number of cases since the outbreak began in January stands at 11,484.

Currently, 20 people are being treated at intensive care units, with three of them requiring ventilator support. 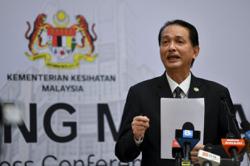