“I have taken over the reins of the state in unusual times, as we are facing serious economic issues due to the Covid-19 pandemic.

“Our aim is to overcome these problems, ” he told a press conference at his office after being sworn-in as Sabah’s 16th Chief Minister by Yang di-Pertua Negeri Tun Juhar Mahiruddin at Istana Negeri yesterday.

Hajiji, 65, who appointed six of the 11 ministers from his Gabungan Rakyat Sabah (GRS) coalition partners, said he was confident that his Cabinet members were equipped to help him resolve the problems faced by the people.

“We are working as a team to administer and look after the state and its people, ” he added.

Thanking the governor, Hajiji said GRS won the state election with a clear mandate from the people.

He pledged to serve all Sabahans irrespective of their backgrounds or political leanings. 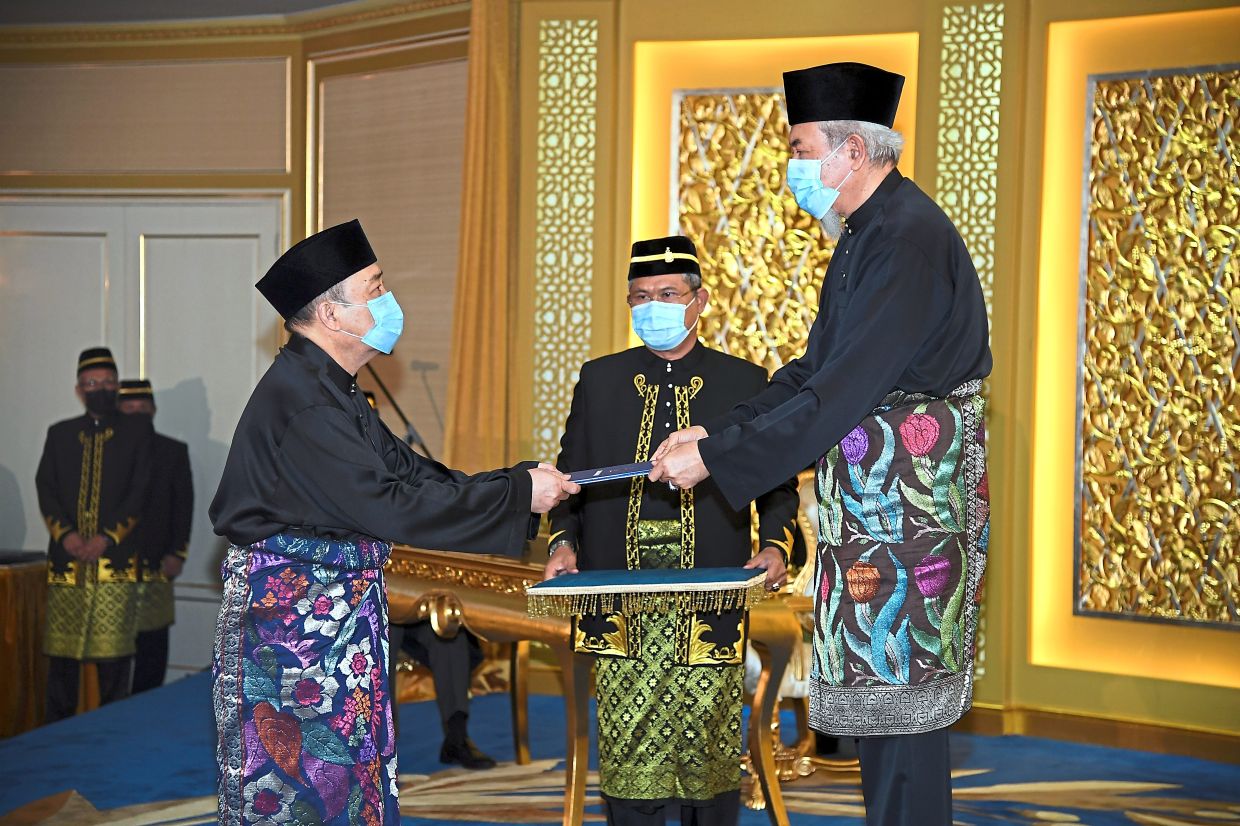 New chapter begins: Juhar presenting the letter of appointment to Hajiji at his swearing-in ceremony at the Istana Negeri in Kota Kinabalu. — Bernama

“This is a huge and challenging responsibility. I urge everyone to unite and work for Sabah’s interest, ” he said.

“My aim is to lead Sabah to greater heights.”

He said with Covid-19 cases spiking in Sabah, the first order of business would be to curb its spread.

Meanwhile, Hajiji is expected to walk a tightrope in deciding the Cabinet portfolios among GRS.

He said Masidi would take the Local Government and Housing portfolio that was initially slotted for Bung, who was also appointed one of the three deputy chief ministers.

The Chief Minister did not say if he was going to keep the state Finance portfolio but revealed that he would be helping as state Finance Minister II.

He said Masidi, who has wide experience in government as a state Cabinet minister, would be put in charge on the economic recovery of the state due to the pandemic.

“Masidi will help me in finance, mainly on the state economy and facing the Covid-19 pandemic, ” he added.

Besides Bung, the other two deputy chief ministers are Sabah STAR president Datuk Jeffrey Kitingan, who is also the state Agriculture and Food Industry Minister, and PBS vice-president Dr Joachim Gunsalam who takes over as the state Industrial Development portfolio.

Bung gets new portfolio soon after being sworn in