"I call on graduates of 2019 and 2020 who have not been fortunate in securing employment to take advantage of this opportunity to increase their skills and competency and thereby improve their marketability," he said when launching the Penjana KPT-CAP at Universiti Kebangsaan Malaysia (UKM) on Monday (Sept 28).

He said CAP is unlike the usual upskilling programme, adding that it is unique as graduates are ensured of employment upon completing courses under the programme.

"The courses are designed to suit the needs and wants of participating companies who will take on the graduates as their employees," he added.

Muhyiddin cited the Smart Trucker course as an example where the content of the course is suited for the needs of logistic companies.

"The graduate will be offered employment with the logistic company upon completion of the course," he said.

He said the government has set aside RM100mil for CAP as part of the RM2bil allocated for training and upskilling under the nation's economic recovery plan.

Muhyiddin also called on graduates to develop their entrepreneurial skills as this will help them to earn an income and also become "'job creators".

In her welcoming speech, Higher Education Minister Datuk Dr Noraini Ahmad said that 41,161 graduates had not secured employment six months after graduating in 2019.

She added that it is estimated that 75,000 graduates this year would also face the same predicament.

"This would mean that there will be 161,161 graduates who need attention to upgrade their marketability," she said.

As such, she said the Penjana KPT-CAP programme will help these graduates secure jobs or to start up their own businesses.

She said at least 20,000 graduates will benefit from Penjana KPT-CAP.

"As of to date, a total of 140 programmes have been lined up by not less than 100 companies," she added.

She announced that the ministry has also set up a Graduates Reference Hub for Employment and Training or GREaT for graduates to apply for the programmes.

PM: Use Penjana to upskill 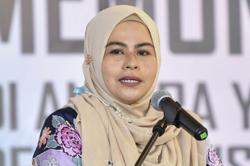