KOTA KINABALU: Yang di-Pertua Negeri Tun Juhar Mahiruddin is expected to make his decision on who will be the next Sabah Chief Minister today.

This was despite the top Gabungan Rakyat Sabah (GRS) leaders being holed up in a hotel since early yesterday morning, followed by a meeting between them and Juhar at Istana Negeri later in the day.

It is understood that the leaders would leave it to the Yang di-Pertua Negeri to decide on the choice of Chief Minister, although some sources claimed that the GRS leaders and assemblymen had decided on one candidate.

It is learnt that Istana Negeri is expected to be furnished with more documents from GRS before making a decision.

“The Yang di-Pertua has asked for more time to make a decision, ” Bung Moktar said when met at the gates of the Istana.

As they left Istana Negeri at Signal Hill here, Hajiji echoed Bung Moktar’s statement while Jahid said they had a “fruitful discussion” with Juhar.

The meeting with Juhar might have ended the political impasse over the choice of Chief Minister after both Umno and Bersatu failed to earlier agree, with both parties wanting the candidate to come from their respective parties.

Bung Moktar, the Lamag assemblyman and Kinabatangan MP, told reporters before their meeting with Juhar that they would let him decide.

He did not elaborate on whether both Umno and Bersatu had agreed on which party should hold the Chief Minister’s post.

All GRS assemblymen had earlier met at the Magellan Sutera Resort, where they are believed to have discussed the choice of candidate.

It is still not clear what deal has been struck within GRS, which holds 38 seats, with the three independents backing them. 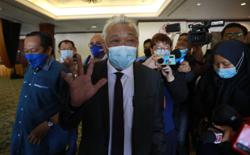