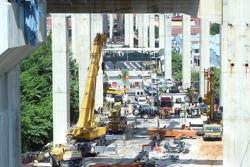 PETALING JAYA: On Dec 30, 2005, the nation was shocked by the death of one of its brightest and youngest corporate figures, Dr Liew Boon-Horng.

Liew, then 35, the managing consultant of Ethos Consulting, died instantly when a metal mould weighing almost 2 tonnes fell on his car from the 20th floor of an under-construction condominium along Jalan Sri Hartamas; his driver sustained serious injuries.

Has much changed then, in our construction industry?

As recent as 2017, the Construction Industry Development Board (CIDB), an agency under the Works Ministry, admitted that the industry was characterised by “frequent fatalities”.

“In 2014, construction had the highest fatality rate of any industry, with 72 deaths per 1,000 workers. By comparison, manufacturing had the second highest rate, at 45 deaths,” it said in Heights, an industry-focused publication.

Last weekend proved to be a dark moment again in the construction industry here, with three high-profile incidents – two involving construction cranes and one was of objects falling from height. 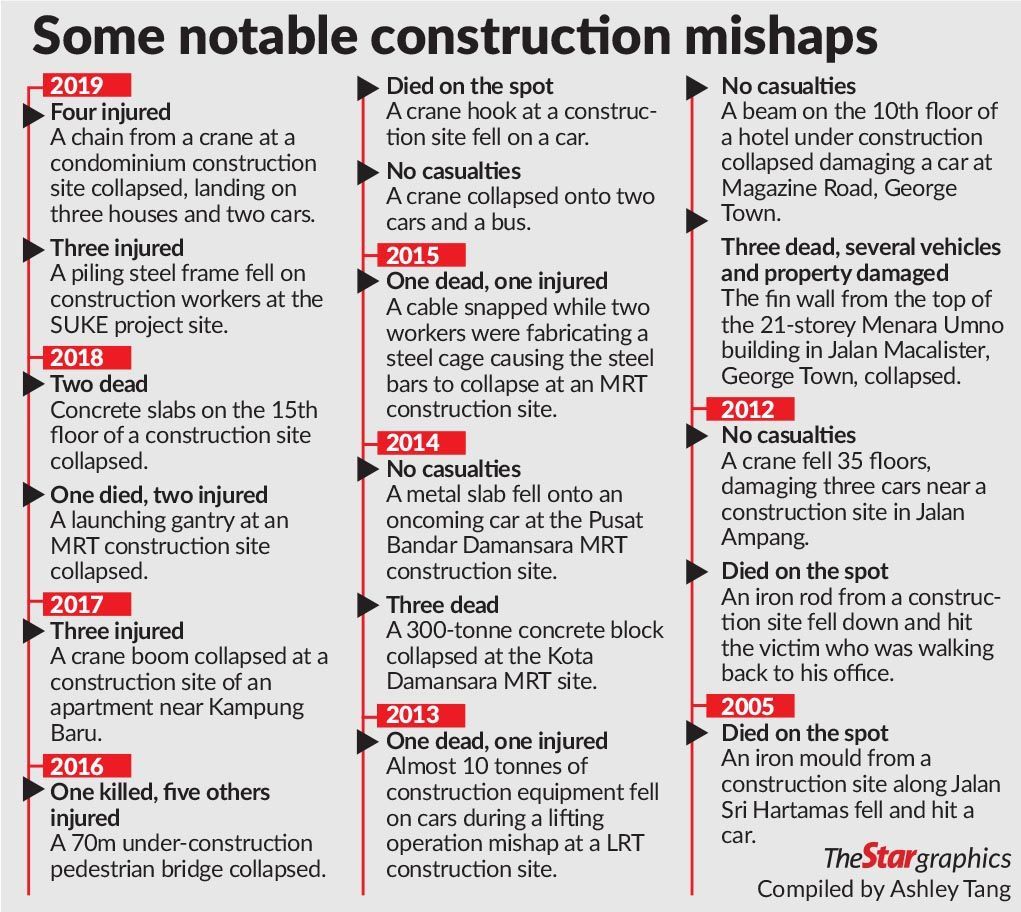 At 5.45pm last Saturday, a concrete slab from the Sungai Besi-Ulu Kelang Elevated Expressway (SUKE) fell on a Proton Saga travelling on the Middle Ring Road 2 in Bandar Tasik Selatan, Kuala Lumpur. The slab was part of the parapet wall of the elevated highway construction site.

The driver, a 25-year-old woman, sustained injuries to her left arm.

At nearly the same time that day, part of a construction crane fell off a trailer and hit a Perodua Myvi along Jalan SS2/24, Petaling Jaya.

The trailer carrying disassembled parts of a construction crane brushed against two utility poles, dragging down cables near the intersection of Jalan SS2/24 on Saturday.

The dislodged crane segment hit the woman’s car, causing severe damage to the car. Fortunately, the driver escaped without injuries.

Petaling Jaya police said both drivers in the incident have lodged reports, in a case that would be investigated under Rule 19 of the Road Traffic Rules 166/59.

Around 8.30pm on Sunday, in what appears to be a hit-and-run case near Taman Len Seng in Cheras, Kuala Lumpur, a mobile crane was believed to have hit a Proton car in front of it.

The crane crushed the car’s roof. The trapped driver survived the incident.

Though the last two incidents are technically road traffic accidents, the common thread that binds all is that they all involve construction equipment.

This has sufficiently alarmed the Works Ministry to the extent that it has summoned all construction bosses for a meeting at its headquarters today.

As observers await the outcome, it is helpful to review what has been attempted over the last few years to increase the safety culture in our construction sector, even though Malaysia does have many good construction practices to show.

One serious shortcoming is that there seems to be a shortage of qualified manpower to police safety at the many sites across the country.

“Malaysia has insufficient site safety supervisors, occupational safety and health inspectors, and safety and health officers. This makes it difficult to enforce safety and quality standards, allowing firms to evade even strict regulations,” it said.

As such, it is to no one’s surprise that the construction industry has relatively high fatality rates compared with others.

CIDB stated that the sector was also beset with “permitting problems”.

“Malaysian construction companies must wait an average of 74 days for a building permit, which is more than three times the waiting period in Singapore, for example. Not only does this slow down construction projects, but it reduces competition, preventing the industry from making long-term quality and safety improvements.

“As with the global construction industry, for all these challenges, there are also signs of improvement,” said the board, which added that from 2006 to 2015, Malaysia actually instituted the Construction Industry Master Plan, a concerted effort towards safety, other than quality and efficiency.

After the latest incidents over the weekend, Malaysians have expressed concerns about safety when driving past such sites.

A social media user, Steven Tan, said all overhead construction should be suspended until safety standard operating procedures were established to avoid accidents like this happening again.

In a statement on Sunday, the Works Ministry said the SUKE incident “should not have happened” and that the ministry would not compromise when it comes to safety.

“At the same time, CIDB and the Malaysian Highway Authority (LLM) have been directed to perform a comprehensive audit on work that impinges on public safety,” the ministry said.

It added that the main contractor had issued a stop-work order to the subcontractor and sealed off the site for investigation, while the developer had also inspected all parapet walls other than the safety procedures and method statements for the parapet wall installations.

“DOSH (Department Of Occupational Safety And Health) has also visited the site and we are awaiting their findings,” said the statement signed off by Works Minister Datuk Seri Fadillah Yusof.

He said that other orders to LLM and SUKE concessionaire Projek Lintasan Kota Holdings Sdn Bhd (Prolintas) included reviewing the design to ensure risk minimisation to workers and the public, tighter scrutiny of the related consultants and contractors, as well as the enlistment of “experts” to manage risks during work that took place over existing roads. “LLM and Prolintas have been ordered to review the design and work methods before work on SUKE can resume,” said Fadillah.

“LLM and the ministry are now conducting a safety audit, and action will be taken to determine the execution of responsibilities at all levels, including oversight, supervisory, quality, design and methodology,” he added.

At press time, Prolintas had not responded to The Star’s request for comment.