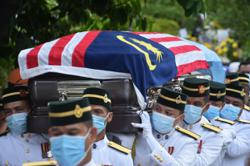 KUCHING (Bernama): Queen Elizabeth II, the ruler of Great Britain and her government on Monday (Sept 21), conveyed their condolences to the family of Malaysian war hero, the late Datuk Awang Raweng, who died at the age of 91 on Friday (Sept 18).

The British High Commission’s Defence Advisor, Group Capt Simon Hindmarsh conveyed the monarch’s message to the family at the funeral service of the late Awang at the Heroes Memorial cemetery, here, on Monday (Sept 21).

Met by reporters after the service, he said, he knew about the demise of the Iban tracker on Sunday (Sept 20) and immediately made it his top priority to come here to pay his respects and condolences to the family members.

"It is not just me personally but on behalf of Queen Elizabeth II, the monarch and the British government as well, to this great soldier,” he said.

Hindmarsh said Awang had met with Queen Elizabeth II on several occasions for being the only Malaysian to receive the George Cross medal, named after King George VI of England, which was accorded to him in November 1951.

"The George Cross medal is the second highest honour after the Victoria Cross and awarded to military personnel and civilians who displayed incredible character as displayed by Awang in 1951, who served with the British army to fight communist insurgents in the Malayan peninsula then,” he added.

"I, on behalf of the Malaysian Armed Forces, wish to extend our condolences to the family of the late Sgt Datuk Awang and thank him for his services and sacrifices to the nation,” he said.- Bernama 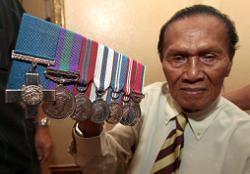