A family that allegedly takes bribes together, gets remanded together

PUTRAJAYA: Three members of a family have been remanded for allegedly receiving money to expedite appeals by fishing boat owners to reduce their compounds.

The three, including a division director in a government department, have been remanded for four days by the Malaysian Anti-Corruption Commission (MACC).

The other two suspects are the director's daughter and son-in-law.

The three, aged between 32 and 59, were arrested at the MACC headquarters on Monday (Sept 14) when they were summoned to give their statements.

Sources said the suspects were believed to have received bribes of between RM500 and RM2,000 from fishing boat owners as a reward for expediting investigations and reducing their compounds for committing offences under the Fisheries Act.

The “assistance” given includes ensuring that boats seized were also released.

"Once done, the money was said to have been banked into the (director’s) daughter's account," said a source.

It is learnt that MACC investigators had also seized more than RM21,000 in cash, jewellery and luxury watches. 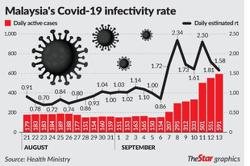