Under the Penjana Hiring Incentive programme, employers receive financial assistance of RM1,000 for up to six months for each PWD hired.

NURAISYAH Mohd Radzi was looking forward to a career in graphic design when a road accident landed her in hospital for seven months.

She was riding a motorcycle and collided with a car, which caused her left leg to be shorter.

Nuraisyah uses a walking stick now and is a certified Person with Disabilities (PWD).

The 23-year-old who obtained her diploma in graphic design from Kolej Poly-Tech Mara Batu Pahat had to pay off her study loan of RM36,000, so she sold ice-cream from her parents’ house in Alor Gajah, Melaka, while she looked for a job.

On Aug 18 this year, she attended the Social Security Organisation (Socso) PenjanaKerjaya Career Carnival in Melaka, where she learnt about the MYFutureJobs portal and applied for a job.

“I got the job immediately, ” said Nuraisyah about her employment as a clerk at Econsave supermarket in Sungai Udang, Melaka, which pays her RM1,200 monthly.

“I am grateful to get this job, as I want to settle my study loan, ” said the fourth child among eight siblings whose father is a factory worker and mother a homemaker.

“We want to help those who have difficulty finding a job. The seven PWDs are employed as sales assistants and clerks at Econsave Sungai Udang, Batu Berendam (Melaka) and Bahau (Negeri Sembilan), ” she said.

Employers will also receive RM800 in financial assistance for up to six months if they hire an unemployed person aged below 40 years and RM1,000 each for the same duration if they employ a jobless person aged 40 and above.

The portal provides employment options for job seekers, while employers can seek suitable candidates with the skills that match the job.

Human Resources Minister Datuk Seri M. Saravanan urges employers with job vacancies or those who are expanding their operations to utilise MYFutureJobs to hire the right talent.

At the same time, employers can tap into the hiring incentive provided by the Government, including skills training programmes for their newly hired employees.

Since the implementation of Penjana in June, more than 2,000 jobseekers and vacancies are posted daily on MYFutureJobs.

“The portal is user-friendly with advanced technology that can match profiles accurately. It is not merely a keyword-based search that generates job matches.

“The portal is built from many years of research matching algorithms based on advanced economies and has been contextualised to Malaysian labour market requirements, ” he said.

The MYFutureJobs portal plays a crucial role in the labour market system in the long run, he added, as the real time data generated by the portal could assist the Government in making effective policy decisions when it comes to supply and demand in the employment market.

Testimonies from the portal’s users have proven its effectiveness in addressing the needs of employers and employees.

Cleaner Maimunah Kamil, 56, was out of work for five months after she was retrenched in February.

She managed to find work with Suri Pantas Sdn Bhd which pays her RM1,200 a month to keep UTC Kuching’s public areas clean.

Suri Pantas human resources manager Tinno Noel said the company employed Maimunah and another retrenched worker and qualified for the government’s hiring incentive which offset part of their salary.

On MYFutureJobs, 55-year-old Theresa Sia found a job as administrative and operations manager of Montfort Youth Centre in Melaka, which provides vocational skills and character formation training for youths aged between 16 and 19 years at the fully-residential institution.

“It’s difficult to get a job during this period, but the MYFutureJobs portal is very helpful, ” said the mother of two who in March lost her job as process improvement manager at a homestay when the place closed down due to the Covid-19 lockdown.

Sia also received a total of RM3,000 in allowance from Socso when she was unemployed.

“That helped to pay my bills, ” she said.

“But lately funding has reduced tremendously, ” she lamented.

“This kind of government assistance helps to subsidise their pay, ” she said. 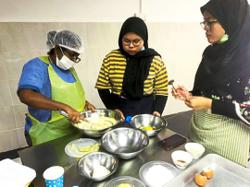