PETALING JAYA: The candidate for Sabah chief minister under Gabungan Rakyat Sabah (GRS) should only be chosen after the conclusion of the state elections, says Umno information chief Shahril Hamdan.

He said that considering the fluidity of the situation in the state, there will be many considerations should GRS win the poll.

"One of the biggest factors is who (which party) wins the most seats and has the biggest support from the public as an indicator of legitimacy in representing public aspirations," he said on Saturday (Sept 12).

Earlier in Tuaran, Prime Minister Tan Sri Muhyiddin Yassin hinted that if GRS forms the state government, Datuk Hajiji Noor was a potential candidate for the post should others agree.

Hajiji, who is Sabah Parti Pribumi Bersatu Malaysia chief, will be defending his Sulaman seat.

Muhyiddin also announced that the formation of GRS was to unite Perikatan Nasional, Barisan Nasional and Parti Bersatu Sabah.

Shahril said that the issue of chief minister candidate had yet to be discussed with Barisan.

"The parties' top leadership, especially the presidents and heads of Sabah parties, must sit down urgently.

"We must stick to one narrative and go with it. Don't say one thing behind the scenes and another in public. That serves no one but Warisan," he said. 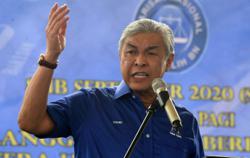 CM will be named once Barisan wins, says Ahmad Zahid