KOTA KINABALU: A dentist is among the four Sabah MCA candidates for the state polls.

Eager to serve: Dr Chang, Lu, Chan and Chew will be contesting the Likas, Kapayan, Elopura and Karamunting seats respectively.

Lu said MCA was determined to serve the communities in the four constituencies with distinction, if given the mandate.

He said MCA would be contesting under the Barisan Nasional logo.

“Our MCA machinery is all set to collaborate with counterparts in Barisan and forge new strategic alliances with components of Perikatan Nasional to defeat Warisan and its coalition, ” Lu said in a statement.

Dr Wee said the party was contesting for the first time in the state seats of Elopura and Karamunting, apart from fielding candidates in Likas and Kapayan.

“We are fielding four candidates under the Barisan Nasional ticket. Wish all of them a good fight!” he said during a visit to the Likas operation centre where he met with the Sabah MCA election team.

Sabah election to go on 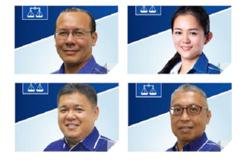