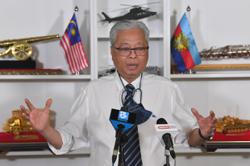 The Benteng LD (Lahad Datu) cluster was first detected on Sept 1 after two undocumented migrants from the Philippines were caught by the authorities under the “Ops Benteng” mission, a joint operation by the police, Armed Forces and other agencies to catch undocumented foreigners.

"Imagine if we didn't have Ops Benteng. They would have come in and out as they pleased.

"We might have had to revert back to the movement control order (MCO)," he said.

Affendi added that many undocumented migrants were still being arrested despite the enhanced enforcement.

"We have released the number of arrested illegal immigrants online and they still try their luck to enter the country.

"Those that enter, we don't know if they are Covid-19 positive or not. And we know that the surrounding areas outside Malaysia still have many cases," he said press conference at Wisma Pertahanan here on Thursday (Sept 10).

"Primarily around the borders. Smuggling is hard to detect with equipment. We need men on the ground, ” he said.