Zainul had drawn flak for saying that Veveonah, who said she had to stay overnight up a tree to get a stable Internet connection to sit for online examination, did not, in fact, have any examination on the day she recorded her video, which was posted on YouTube.

Minister Datuk Saifuddin Abdullah said Zahidi had informed him that he would do so at Dewan Negara in response to questions raised in the Senate.

"His answer has been recorded in the Hansard and the deputy minister will rectify what he said," said Saiffudin on Friday (Sept 4) after launching the Tanjak Merdeka programme.

Zahidi had said that the student from Sabah appeared to have been trying to make a name for herself to achieve temporary fame (“terkenal sekejap”) through her video.

He had to apologise shortly afterwards when he discovered that his response was based on inaccurate information.

Veveonah, 18, who gained the nickname "treetop girl", responded by saying she was saddened and disappointed over the remarks.

The video, which was posted by Veveonah in June, went viral and received widespread attention, prompting the Malaysian Communications and Multimedia Commission (MCMC) to issue a statement, saying it would work towards improving Internet coverage in her area at Kampung Sapatalang in Pitas, Sabah. 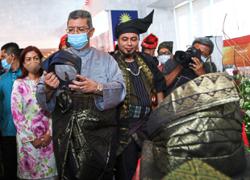 ‘Don’t lose sight of tradition as we progress’