Recording the glory days: Adly (left) holding a copy of ‘Psyche Oh! A Go Go’ during the book launch at the Vans store in Pavilion Kuala Lumpur, while Naza admires some vintage album covers of musicians and bands from the 1960s.

KUALA LUMPUR: Naza Mohamad, a record store owner and musician, is slowly starting to see that the masses love the idea of someone documenting “untold stories” in the Malaysian music scene, especially those from its more obscure corners in the 1960s and 1970s.

“I never thought that putting out a book about ‘lost’ Malaysian music would attract so much attention from the younger generation, but I’m glad that people are starting to rediscover our pop music culture, which really hasn’t been documented properly,” said Naza at the launch of his book Psyche Oh! A Go Go at the Vans store in Pavilion Kuala Lumpur on Saturday.

The recordings were handpicked by Naza from his private collection of vintage vinyl.

The focus was on non-mainstream sounds that had been largely ignored or forgotten, he said.

“It’s timely that we are in the Merdeka and Malaysia Day season.

“This book will give you a fresh perspective on youth culture during that era.

“You’d be surprised at how advanced some of these unknown Malaysian acts were, tapping into psychedelic rock influences, trying out soul music and being more adventurous with the music they made,” said Naza.

The book journeys through “a young multiracial Malaysia waking up to the 1960s”, Naza noted, with entries from the soulful Helen Velu, the Strollers, Adnan Othman, Sarawak-based Rose Iwanaga & The Avengers, right down to mysterious acts such as Y. Hashim Dengan The Lost Dimensions, Rudyn Al-Haj, A. Zanne & The Fifty Fifty, as well as a look at the rugged side to the legendary Rocky Teoh.

“There is very little information about many of the artistes found in this book.

“That’s why we had to write it and to start this ‘jigsaw puzzle’ with these 100 bands in the book,” said Adly.

“With Psyche Oh! A Go Go, we hope to gather more leads about this ‘lost music generation’ which I feel will give us a better understanding of how exciting and progressive early Malaysian pop music was outside radio and mainstream circles,” he added.

Psyche Oh! A Go Go, published by Sputnik Rekordz and Obscura Malaysia, is a self-funded project put together during the movement control order period. 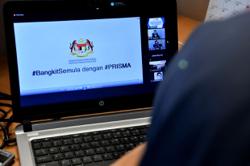