BUTTERWORTH: A heated argument ensued after a deputy public prosecutor requested the court to give an order to stop anyone from giving sub judice comments on the trial against former finance minister Lim Guan Eng.

Lead DPP Ahmad Akram Gharib made the application after DAP national publicity secretary Tony Pua was said to have questioned the credibility of one of the witnesses as reported by an online news portal.

“He (Pua) mentioned the name of a witness and made sub judice statements about the credibility of said witness and case,” said DPP Ahmad Akram before handing out printed copies of the article to the court and defence counsel at the Special Sessions Court for Corruption in Butterworth yesterday.

Citing another instance, he said Pua also made sub judice comments on the case in a video online.Lead counsel Gobind Singh Deo objected to the order, saying a similar request was also raised in the Sessions Court in Kuala Lumpur on Aug 7 and judge Azura Alwi had denied the application.

Gobind said there were also other opposing parties who made comments against Lim in the case.

“I oppose the request. We should be given the space to make our stand. He (Lim) is a well known person and the press will have questions pertaining to the case,” he said, adding that action could be taken against those who went overboard with their comments.

Earlier, Lim pleaded not guilty to the charge of using his position as the then Penang chief minister to solicit a RM3.3mil bribe for himself by assisting a company owned by Datuk Zarul Ahmad Mohd Zulkifli to be appointed to conduct construction for the RM6.3bil undersea tunnel project.

He is alleged to have committed the offence between January 2011 and August 2017 at the chief minister’s office in Komtar.

The charge under Section 23(1) of the Malaysian Anti-Corruption Commission (MACC) Act 2009, for abuse of power, carries a jail term of up to 20 years and a fine of no less than five times the amount of gratification or RM10,000, whichever is higher, upon conviction.

Ahmad Akram requested judge Ahmad Azhari to transfer the case to Kuala Lumpur for it to be heard together with the earlier Section 16(a)(A) of the MACC Act 2009 case brought to court on Aug 7 as both charges are related.

The DPP said transporting the evidence, mostly in document form, from Putrajaya would not be logistically feasible as well as for the safety of the documents.

He also said Lim’s role as a Member of Parliament required him to attend Dewan Rakyat sittings.Gobind objected to the request, saying there were no details of where and when the transactions totalling RM3.3mil were made.

“The reason given was just that the documents would need to be transported back and forth,” he said.Judge Ahmad Azhari agreed for the case to be transferred to Kuala Lumpur.

On Aug 7, Lim claimed trial in the Sessions Court in Kuala Lumpur to soliciting gratification to help a company secure the RM6.3bil Penang undersea tunnel project.

Lim is accused of using his position as the then chief minister to solicit a 10% cut of the profits which would be made from the road and tunnel project.

He allegedly sought 10% of the profits from Zarul Ahmad, a senior director of Consortium Zenith Construction Sdn Bhd, as an inducement to get the contract for the project. Zenith was awarded the project.The offence was allegedly committed at a hotel near Mid Valley City here in March 2011.

The charge under Section 16(a)(A) of the MACC Act 2009 carries imprisonment not exceeding 20 years and a fine of no less than five times the value of the bribe or RM10,000, whichever is higher, upon conviction.

Lim will also be charged today at the same court for “other cases”. 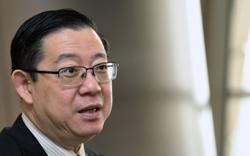