Due recognition should be given to labourers of the Thai-Burma Death Railway, says interest group

PETALING JAYA: It is high time the international community gives due recognition to the Asian forced labourers of the Thai-Burma Death Railway.

Death Railway Interest Group chairman P. Chandrasegar (pic) said the Asian forced labourers were never given due recognition for their contribution in building the railway stretching 415km from Ban Pong in Thailand to Thanbyuzayat in Myanmar.

"We hope, as the world observes the 75th anniversary of the end of World War II this week, due recognition is given to the Asian labourers including Malays, Chinese, Indians, Javanese, Burmese, and others, who have died building the railway track on treacherous terrain.

"Much has been highlighted about the Caucasian prisoners of wars who were forced by the Japanese to build the railway.

"But nothing much is said about the Asians, mostly from South-East Asia, who were forced to build the railway track under gruelling conditions.

"Many died, and were buried in unmarked mass graves without any religious rites.

"We do not want their contributions to be forgotten, as years pass by," he said.

Chandrasegar said he had taken a personal interest in the Death Railway saga because he regretted not hearing the entire story firsthand from his father, A. Ponnusamy, who died of a stroke at the age of 67 in 1992.

Chandrasegar said his father had been ready to relate his experience upon his retirement.

"But by then I was busy studying and commuting daily between Negri Sembilan and Kuala Lumpur to work.

"One fine day, I finally bought a voice recorder to record my father's story. As it can be kept as part of oral history.

"But it was too late. My father had a stroke and died without regaining his ability to talk.

"After his demise, I found his declaration note, affirming he was taken by the Japanese to work in Thailand for four years.

"He had to submit the declaration to the Malayan Railway authorities to justify his pension claim during the period he went missing during the Japanese occupation.

"After seeing the declaration note, the gravity of the problem dawned upon me. In 2006, I initiated a personal mission to find other survivors and hear their stories.

"But there are not many survivors left," he said.

Chandrasegar hoped the Death Railway narrative would be included in history books.

Sikh workers of the Death Railway 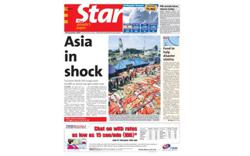