PETALING JAYA: Despite it being compulsory now to wear a face mask to stem the spread of Covid-19, there are a handful who still disregard the rule, police say.

Petaling Jaya OCPD Asst Comm Nik Ezanee Mohd Faisal said he received feedback from business operators who barred entry to those not wearing face masks, even before the requirement was made mandatory from Saturday.

“Store workers said a few customers got angry when they were told to wear a face mask and even argued, saying there was no evidence that it could help prevent the spread of Covid-19.

“Now that it has become mandatory, do not argue when you are told to wear one, ” he said.

The World Health Organization (WHO) updated its advice on the use of face masks, saying it can limit the spread of certain respiratory viral diseases including Covid-19.

It had previously advised face masks only for healthcare workers and those with Covid-19 symptoms but changed its stance to encourage the public to wear face masks as part of an approach to suppress the spread of the disease.

ACP Nik Ezanee said his team would continue checks to ensure that the public followed the standard operating procedure (SOP) under the recovery movement control order (MCO), including registering before entering business premises, sanitising hands and keeping a physical distance of one metre.

He said police would conduct random checks at restaurants to ensure that customers wrote their details or scanned the MySejahtera, or Selangkah QR-code in Selangor.

“We will ask customers if they have done so and check their information against details in the logbook or if they scanned the code, ” he said.

Based on checks, ACP Nik Ezanee said most people in Petaling Jaya complied with the rules.

“Some residents raised concerns about those who may not be able to afford masks. We will bring this up with local leaders, ” he added.

ACP Nik Ezanee said Petaling Jaya police would take a “soft approach” for now to remind and advise people about the new rules, adding that stern action would follow against defaulters. ‘Quality of face masks will be monitored soon’ Firm reserves 20% of its face masks for frontliners 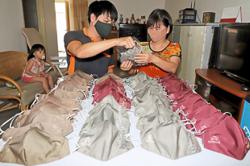