PETALING JAYA: All videos on the Sugu Pavithra channel have been deleted.

In place of the deleted content was a notice which stated: “This channel doesn’t have any content”.

Pavithra, 28, and her husband Sugu, 29 became YouTube sensations after they began uploading videos of her cooking on the channel during the movement control order period.

Within a few months, the couple garnered hundreds of thousands of subscribers, a silver YouTube Button, and even met Prime Minister Tan Sri Muhyiddin Yassin on July 9.

On July 21, Pavithra received the title of “Ipoh City Icon”, which is given to Ipoh-born individuals for their success.

However, on July 24, Sugu was charged with hurting Pavithra at the Raja Permaisuri Bainun Hospital premises’ parking lot and for possession of a sickle at the hospital.

After posting bail for him the same day, Pavithra said they no longer wanted the Ipoh City Icon and wanted to live normally and just want to focus on their YouTube channel. Sugu Pavithra back on YouTube with mutton dalca video 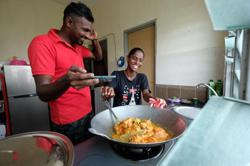