IPOH: M. Sugu, the husband of YouTuber S. Pavithra, has been charged with hurting her in a parking lot at the Raja Permaisuri Bainun Hospital.

Sugu, 29, claimed trial to the charge under Section 324, which was read together with Section 326A of the Penal Code for voluntarily causing hurt by dangerous weapons or means against his spouse.

Based on the charge sheet, Sugu is said to have caused injuries to Pavithra on her lips, left cheek and right arm at the hospital’s parking area on Tuesday between 4pm and 5pm.

He is also said to have used a mobile phone and the handle of a sickle when committing the offence.

If found guilty, Sugu could be jailed up to 10 years, or be whipped or fined, or any two of the penalties.

When requesting for a lower bail, lawyer Mahinderjit Singh said his client had already been charged earlier yesterday with bail set at RM10,000.

Sugu earlier claimed trial to being in possession of a sickle at the hospital.

He was charged under Section 6 (1) of the Corrosive and Explosive Substances and Offensive Weapons Act.

In the earlier charge under the Corrosive and Explosive Substances and Offensive Weapons Act, the statement of facts said that the police booth at the hospital was alerted to an incident where Sugu was found to have brought along with him a sickle outside the maternity ward on Tuesday evening.

He was arrested at about 6pm and police found the 66cm sickle beneath the seat of his car.

It also stated that Sugu had a previous record of five cases related to gambling.

In seeking a lower bail, Mahinderjit told the court that Pavithra had retracted her police report on Wednesday.

He also said that it was a misunderstanding between the couple, who have two children.

He also ordered Sugu to report to the nearest police station on the first of every month until the case is settled.

When met outside, Mahinderjit told reporters that Pavithra, 28, who was also in attendance during the proceedings, would post the bail.

Sugu and Pavithra came under public spotlight with their series of cooking videos on YouTube, popular during the movement control order period.

They even got the attention of Prime Minister Tan Sri Muhyiddin Yassin.

On Monday, Ipoh mayor Datuk Rumaizi Baharin announced that the couple would be given the title Ipoh City icon as a recognition of their success.

The award will be given to them officially in May next year.

However, Pavithra said yesterday that she and her husband no longer wanted the title.

Both of them were just normal people and would like to remain as such, she said.

“We want to live normally and just want to focus on our YouTube channel.

“There’s no need to idolise us as we are not really qualified to be an icon,” she told reporters after posting bail for Sugu.

“We are not that great and there are many others who are more qualified than us.” 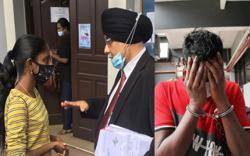 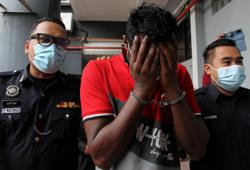