Beware if you are outdoors during a thunderstorm

PETALING JAYA: The rainy season is upon us and with that comes rolling thunderstorms and the risk posed by lightning strikes.

If you are outdoors during a thunderstorm, the Malaysian Meteorological Department (MetMalaysia) recommends that you enter a large building or a car. 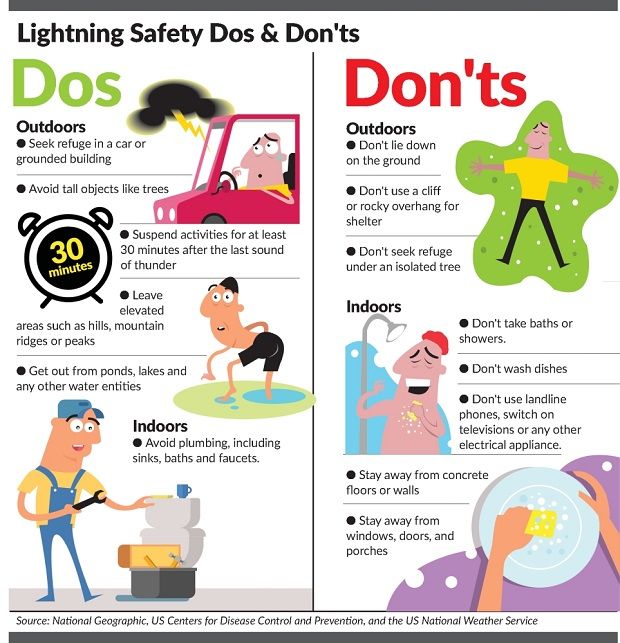 You should also avoid taking a shower, using the telephone or any electrical appliances during these times.

“If there is thunder and there is no solid structure to take shelter in, go into a car and shut the windows.

“Do not take shelter in a small space or under an isolated tree.

“If you’re out on a boat or swimming, return to land and stay away from the water.

“Phone lines and metal pipes can conduct electricity. Avoid using the telephone or any electrical appliances.

“Use a phone only for emergencies. Disconnect unused plug points. Do not shower, ” said the MetMalaysia on the dos and don’ts during a thunderstorm published on its website.

Air conditioners should also be turned off as lightning discharge can put more load on the compressor.

If driving on the highway, be careful of strong winds.

“Should flash floods happen, be prepared to move to higher grounds, ” it said.

Should you be trapped outdoors with no place to take shelter in, try to find a low-lying place that is far away from trees, fences and poles, said MetMalaysia.

“If in a jungle, take shelter under a shorter tree.

“If you find that your skin is tingling or your hair is standing on end, immediately squat to the ground, place your hands on your knees with your head in between your knees.

“Make your body as small as possible and avoid touching the ground as much as possible, ” it said.

Most injuries and deaths due to lightning strikes happen to those who are outside a building, according to MetMalaysia.

Thunderstorms can happen all year round but were more common during the inter-monsoon period from April until May and between October and November.

“Lightning often strikes outside the areas where heavy rain is occurring and can strike as far as 10 miles (16.1km) from the raining area.

“The air near the area struck by lightning becomes hot and reaches temperatures above 27,000°C, which is hotter than the surface of the sun, ” said MetMalaysia.