PETALING JAYA: The Cabinet has decided that Malaysians do not need a licence to post their videos on social media, says Communications and Multimedia Minister Datuk Saifuddin Abdullah.

This appears to be a complete U-turn from his explanations on July 23 when he informed Parliament that anyone who wants to post or publish their videos must have a National Film Development Corporation (Finas) licence.

"The Cabinet has agreed to uphold freedom of the media and individual freedom on social media.

"Social media users such as those of TikTok, YouTube and as such are free to use the platforms to produce and upload videos as usual without the need to apply for a licence or fear being charged under the Finas Act.

"The government will amend the Finas Act 1981 (Act 224) by taking into account the current situations," said Saifuddin in a press statement.

He further said that the latest statement is "a continuation" from the statements Thursday (July 23) which stated that Perikatan Nasional government has never and has no intention to use Finas Act to curb the personal freedom of any individual on social media and that there is a need to further amend the Act.

"The ministry has already begun efforts to amend the Acts under the Ministry's scope so that they can be suitable for the current times. The amendment process will begin in the near future," said Saifuddin.

The minister courted controversy on Thursday when he stated that all film production, whether from media outlets or personal media on traditional platforms or even social media, require a licence.

Answering a fellow MP's query in the Dewan Rakyat, Saifuddin said it was compulsory for producers of these films to apply for a Film Production Licence and Film Shooting Certificate (SSP) regardless if they are from a mainstream media outlet or personal media.

He said the Ministry, through Finas, monitors film activities in its efforts to preserve and develop the film industry based on the Finas Act 1981.

"Finas issues three types of licences to the film industry, they are licences to produce, distribute and broadcast films or videos.

"Section 22 (1) of the Finas Act reads that no one can take part in any activities to produce, distribute or broadcast any film unless a licence is issued to the person," said Saifuddin in reply to Wong Shu Qi (PH-Kluang) during the Ministerial Question Time on Thursday (July 23).

Opposition MPs and netizens took Saifuddin to task over his statement, and he rebutted that despite his statement in Parliament, the government has no intention to stifle individual freedom of expression.

Impractical to license all films

‘All producers must apply for licence’ 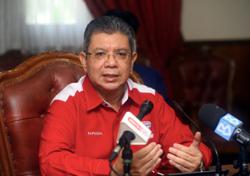