“With regard to the cost implications, it is estimated that it will cost about RM2mil to hold elections for a local council.

“So to hold elections for all the 154 local councils in the country, the amount incurred will be estimated at RM308mil, ” the Housing and Local Government Minister said when replying to a question by Wong Hon Wai (PH-Bukit Bendera).

Zuraida said there were no plans to hold local council elections at the moment as the matter was still under study by the government.

“The study will cover a period of three years with the findings brought to the Cabinet and Parliament for approval by mid-2021, ” she said.

Zuraida also said that two committees had been formed to gather feedback from stakeholders and to formulate a mechanism for the implementation of such elections.

She said the study would also include a pilot programme on the local council elections in Penang and Selangor.

Besides the cost implications, Zuraida said several laws needed to be amended if the local council elections were to be held.

Datuk Mahfuz Omar (PH-Pokok Sena) took a swipe at Zuraida, asking if she had the backing of the Cabinet under the Perikatan Nasional administration as PAS – which is part of the ruling coalition – was against holding local council elections.

To this, Zuraida retorted, “When I brought this up during the previous administration, YB Langkawi (former prime minister Tun Dr Mahathir Mohamad) was against it.“Yet none of you from the other side dared to support me, although it was part of the Pakatan Harapan manifesto, ” she said.

Zuraida helmed the Housing and Local Government Ministry under Pakatan’s administration before its collapse in late February this year. 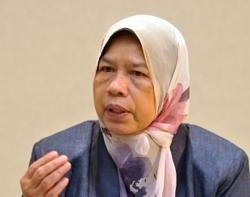