The incentive programme, which was announced by Prime Minister Tan Sri Muhyiddin Yassin under Penjana on June 5, offers incentives of between RM600 and RM1,000 to employers for each employee or apprentice employed for up to six months.

Saravanan said the registration of profiles for employers and jobseekers under PenjanaKerjaya began on June 15.

“Employers with job vacancies are urged to use the platform provided to obtain incentives for hiring local workers, ” he said in a statement yesterday.

The MYFutureJobs portal, www.myfuturejobs.gov.my, recorded a daily average of 3,088 new registrations for jobseekers, while 2,692 job vacancies were posted from June 15 to 30.

According to Saravanan, the incentives include financial assistance for employers who hire school leavers, graduates, the unemployed, retired workers, as well as apprentices.

Under the MYApprentice scheme, employers were entitled to an incentive of RM600 per apprentice hired.

Under the HireMalaysia scheme, employers hiring those under 40 will receive an incentive of RM800 per worker.

Those who hired workers between the ages of 40 and 60, or the disabled, will receive RM1,000 per worker.

Saravanan said employers would also benefit further by employing workers under the PenjanaKerjaya programme as these workers could be sent for skills training and development.

Jobseekers who have to relocate in order to accept a job offer under PenjanaKerjaya will be given assistance of between RM600 and RM1,000. 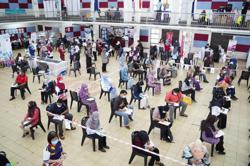