PETALING JAYA: Finding a suitable candidate to be the next Election Commission (EC) chairman is proving to be quite a task for the government, says a senior official.

The official said with speculation of the "looming" general election, it was important that any successor to Datuk Azhar Azizan Harun is able to both manage the polls and also to be perceived as not being biased to any party.

"The appointment is the prerogative of Prime Minister Tan Sri Muhyiddin Yassin – but as the leader of Perikatan Nasional, which took over from Pakatan Harapan without a general election, his choice will be scrutinised, especially by the Opposition and the public.

"So far, there is no potential candidate yet.

"The candidate needs to be someone who is credible and possesses the necessary qualifications as there is a heavy responsibility to shoulder.

"Also, the successor must be perceived to be fair to all parties and non-partisan, as well as being well-versed in electoral laws and must manage the elections in a parliamentary democracy," said the official.

The official also said the candidate must also not be seen as acting in favour of Perikatan.

"The coming polls or GE15 will be his (Muhyiddin's) first as the caretaker prime minister once Parliament is dissolved.

"So a good perception in the eyes of the public will be helpful for Muhyiddin to regain his legitimacy as the premier," added the official.

Several ministers and top government officials drew a blank when asked to suggest some potential names.

Azhar is said to have resigned on June 29.

It is widely speculated that Azhar is tipped to be nominated as the next Dewan Rakyat speaker, replacing Tan Sri Mohamad Ariff Md Yusof.

He can only be considered for the speaker's post once he has resigned from the EC.

Azhar's sudden resignation, however, has left a poser as to who will be his successor.

As the EC has a deputy chairman and seven commissioners, there is also the possibility of changes within its ranks.

A number of the current commissioners were recommended by Azhar when he took charge.

Azhar, a former lawyer and human rights activist, was appointed to the post on Sept 21,2018, by former premier Tun Dr Mahathir Mohamad.

During his tenure, Azhar had advocated various electoral reforms, some of which were already being put into the electoral laws such as lowering the voting age to 18.

He had also pushed for automatic registration of voters, with the proper instruments in place before implementation. 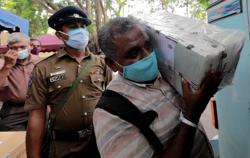