SIBU: The Domestic Trade and Consumer Affairs Ministry has seized 532 units of fake Casio calculators from a shop on June 30.

Speaking at a press conference, the ministry's Sibu branch chief Kelyn Bolhassan said a 33-year-old woman was arrested for allegedly having possession of the items.

"We have taken her statement and released her temporarily while waiting for further action," he said.

He added that a team of nine officers from the branch together with a representative from Casio, raided a shop on June 30 for fake calculators under Section 100 of the Trademark Act 2019.

"The box of all the calculators were labelled as Casio calculator but the insides were fake calculators," he said.

The Act, he said provides for a fine of RM10,000 for every seized item or a jail sentence of not more than three years, or both for individuals.

"For companies, the fine is RM15,000 for every seized item. Our ministry is always cooperating with label companies in fighting against the wrongful use of label name by taking stern action against offenders," he warned.

Meanwhile, he said members of the public who would want to provide information or complaints against errant traders could do so through various channels.

This includes contacting the ministry via its email, e-aduan@kpdnhep.gov.my, while its WhatsApp number is 019-2794317. 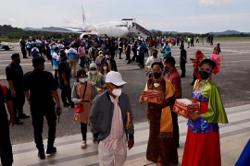