Another person detained in kidnap-death case of property developer

PETALING JAYA: Another person of interest in the fatal kidnapping of a Datuk Seri has been detained, after he surrendered to the police.

"We also obtained another seven-day remand extension on another suspect to help with further investigations," he said in a statement on Tuesday (June 30).

On Saturday (June 28), the body of the property developer was uncovered in the bushes off Jalan Rawang-Bestari Jaya at about 9am.

He had been abducted while jogging in Bandar Sri Damansara here on June 10.

According to the police, a businessman with the title Datuk and a man claiming to be a lawyer were among seven men detained on Friday and Saturday in connection with the case.

They also said the victim knew the Datuk from past meetings, and police were not ruling out business rivalry as the motive behind the fatal kidnapping.

It was one of the suspects who led police to the victim’s body.

At present, a total of nine suspects are in police custody in connection with the kidnapping. 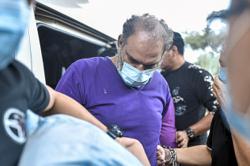