Shafie is seen as the "third force" after the collapse of relations between Dr Mahathir and PKR president Datuk Seri Anwar Ibrahim.

Sources said that Dr Mahathir was supposed to announce Shafie's name at a press conference at 5pm on Friday (June 26), but it was cancelled.

It was learned that the "third force" was to comprise of DAP, Parti Amanah Negara, Dr Mahathir's faction of former Parti Pribumi Bersatu Malaysia MPs and Warisan in a move that would seen Anwar being left out of the Pakatan coalition.

The sources said they expected some of the PKR, Bersatu and Umno MPs to join the third force that they claimed could obtain the necessary simple majority.

The main issue, they explained was that neither Anwar nor Dr Mahathir was being accepted as the choice and they needed a neutral person given the current political uncertainty in the nation.

Shafie, whose Warisan is not part of Pakatan but friendly, has not indicated that he is keen to be named to lead the third force.

Shafie's name was floated around as a potential candidate for the prime minister's post over the last several weeks, as it was understood that certain Pakatan leaders have grown tired of the Anwar and Dr Mahathir impasse, while others see it as an opportunity to end the feud between the duo.

However, this proposal wasn't well-received by Pakatan leaders during a meeting on June 9 while sources aligned with DAP and Amanah have previously said that they hope Shafie's candidacy as premier will put an end to the Anwar-Dr Mahathir feud.

"It's a great idea. Shafie will be the first East Malaysian to be PM," said one source 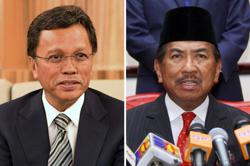