Dr Wee: Unfair to label Chinese as a 'wealthy lot'

KUALA LUMPUR: MCA has expressed its outrage against a statement by Tun Dr Mahathir Mohamad that the Chinese are a "wealthy lot" and that it was "unhealthy" that they live in urban areas.

Party president Datuk Seri Dr Wee Ka Siong said the former prime minister had not updated himself with the statistics of wealth distribution among the ethnic groups in Malaysia.

He said there were enough new reports to show the income level of Chinese has declined.

"I am not sure if Dr Mahathir is pretending not to know, or he is merely playing the racial card," he said here Saturday (June 27).

Dr Wee also regretted that the DAP had remained mute and had not made any response to the remakes by Dr Mahathir.

"Surely, DAP knows that the remarks by Dr Mahathir is erroneous, or is DAP now so afraid of telling Dr Mahathir off," he said.

Dr Wee said Dr Mahathir should stop perpetuating the myth that Chinese Malaysians in the country were rich.

He said such an unfair stereotyping was harmful to racial harmony.

He said many ordinary Chinese were struggling to keep their jobs.

Dr Mahathir, in an interview with Hong Kong-based Asia Times, had said that Malaysian Chinese were a “wealthy lot”, with a majority of them living in the cities and urban centres, and such, is an “unhealthy trend”.

Dr Wee said each day, thousands of Malaysian Chinese crossed over to Singapore to work.

"These are ordinary wage workers who go to work there to earn an honest living, and certainly, they are not wealthy.

"The pasar malam stallholders and the smallholders in plantations are not rich either," he said.

Meanwhile, the Federation of Chinese Associations Malaysia (Huazong) said that no one should perpetuate such a wicked, misleading and discriminating narrative on Malaysian Chinese.

Its president Tan Sri Goh Tian Chuan said the unfair stereotyping may lead to disruption of unity and harmony among the people of different races, and ultimately brings harms to the country.

“Politicians, especially, should always be more cautious when they speak in public and refrain from making such an inflammatory remark.

“It may go out of control and incite hatred and animosity against Chinese businesses, and rip the nation apart, ” he said in a statement on Friday (June 26).

The attainment of wealth, he said, is largely attributed to the people’s hardworking attitude and determination to improve their lives, besides the policies of the government of the day.

Due to the limited opportunities in the public service sector, be they government departments, agencies or government-linked companies (GLCs), such a prevailing trend had essentially compelled Malaysian Chinese to venture into the private sector, he added.

“It is deeply regretful that all these years, the Chinese had to endure such an unfair, hostile and discriminating remarks like “Chinese are rich”, “Chinese are an ungrateful lot”, “Chinese are the outsiders”, “What else do the Chinese want?”, “Balik Tongsan” (go back to China) and “Chinese are the squatters” hurled at them by unscrupulous politicians to score political mileage at the expense of racial unity and harmony.

“If exploited by extremists in the country, such hostile and hurtful remarks may ruin the beloved nation that we have all built together and zealously protected all these years, ” he added.

Goh also urged politicians to stop exploiting race and religious issues for political gain and instead strive for a fairer national economic policy to foster greater unity and harmony among Malaysians of different races and religious background. 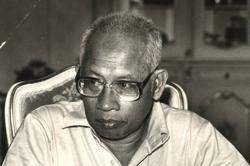