PETALING JAYA: Private higher education institutions are hoping for the government to lend them support, as some of them see lower enrolment rates amid uncertainties caused by the Covid-19 pandemic.

Malaysian Association of Private Colleges and Universities (Mapcu) president Datuk Dr Parmjit Singh said such a drop in enrolment is not just seen in Malaysia but globally.

“In Malaysia, we expect a downturn of both foreign and local student enrolments in 2020.

“In terms of new Malaysian students, it is forecast that there will be a 37% drop throughout the year, ” he said, adding that this means private institutions may expect to see about 86,000 new students this year.

He said there are about 547,000 Malaysian students in private institutions. An estimated 143,000 of them would graduate this year.

For foreign students, he said the forecast was that there would be a reduction to only 7,000 new students this year from about 16,500 last year. While it is too early to tell which fields of study would see a dip in interest, Dr Parmjit said that courses related to the Fourth Industrial Revolution (IR4.0) and technology would still see high demand.

“Technology will play an even more important role in this pandemic era. There will be a tremendous need for innovative solutions – powered by IR4.0 technologies to help people live, work and play in this new normal.

“This does not mean that other disciplines will suffer a major downturn in demand. Their relevance would have to be maintained by ensuring that technology is infused with their core curriculum, ” he said.

He noted that private education institutions were catering to the needs for more than half of all Malaysians at tertiary level.

“Mapcu has submitted various proposals to the government, covering areas that relate to the recovery of the industry, ” he said.

Tunku Abdul Rahman University College president Prof Dr Lee Sze Wei said the institution is anticipating a decrease in enrolment due to the pandemic and the dampened economic climate.

“Next year’s intake will be affected by the delay of the SPM and STPM exams as announced earlier by the government, ” he said.

He said that the financial impact of the pandemic must be minimised, and there must be ways to provide opportunities for youths to pursue tertiary education.

“We must try to address the possible financial difficulties and other concerns they and their families may have in applying to colleges and universities.

UCSI Group Corporate Affair spokesman said they had seen a decline in enrolment for the May intake at the UCSI University.

“Covid-19 has prevented students, except for certain groups of postgraduate students, from attending physical classes.

“The decline in enrolment is across the board in all programmes generally. From the feedback we received, students and parents are feeling uncertain, not knowing how robust online teaching would be.

“Many resolve to wait longer for physical classes to resume, ” he said.

It is hoped, he said, that the government could offer deferment of tax payments not just to tourism players and SMEs, but also to the education sector.

Other proposals included the expansion of the wage subsidy scheme to benefit more education institutions and the exemption of digital tax on information technologies services, he added.

She noted however that it was heartening that certain groups of first-year students could attend face-to-face lessons starting July 1.

She suggested that SPM and STPM exams be cancelled and instead allow for students to be assessed internally and given a predictive grade by their schools.

“It will be up to the higher education institutions to deal with the acceptance (process), which is what they are doing in top universities like Oxford and Cambridge, ” she said. In this way, she added, intakes would not have to be delayed.

On April 17, The Star reported about Mapcu’s appeal to the government to allow universities and colleges to admit students based on their forecast results.

Dr Parmjit had said such a move would prevent the delay of students’ entry into the institution, as well as to support continuity of learning.

It however said the proposal by Mapcu to allow the use of forecast results would require further review. 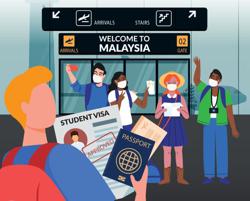