“It is with a heavy heart that His Highness has decided that the restrictive period for Friday and daily prayers in mosques and surau is extended until June 30," said the Ruler’s private secretary Datuk Mohamad Munir Bani in a statement Monday (June 1).

However, the 39 selected mosques that were allowed to hold congregational prayers with not more than 12 people, beginning mid-May, will be allowed to continue.

The 12 people allowed to attend the prayers in these mosques consist of the mosque officials and committee members only, said Munir.

Sultan Sharafuddin had allowed the 39 mosques to have congregational prayers in mid-May, after there was a decrease in Covid-19 infections in the state.

According to Munir, the decision arrived by Sultan Sharafuddin was based on the views and advise of the Selangor Mufti and Selangor Islamic Religious Department (Jais).

“The decision to prohibit Friday and daily congregational prayers in mosques and surau is a difficult and heavy decision for His Highness to make.

“His Highness understands the people’s disappointment in not being able to perform prayers in mosques for 12 weeks up to now," said Munir.

However, Munir added that the decision had to be made to ensure the spread of the dangerous Covid-19 epidemic can be contained and controlled.

He said Sultan Sharafuddin goes through current data on the spread of Covid-19, including new cases, in Selangor, which is indicating a decrease.

Munir said the state Ruler was worried of the risk of Covid-19 infections if the restrictions are loosened.

Even though congregational prayers cannot be conducted, the daily calls to prayer will continue with the presence of the Imam, bilal and siak (assistant) in mosques and surau in Selangor.

Munir said the situation will be rechecked after the first week of June and in the event the spread of the Covid-19 epidemic is found to be on a consistent decline, there is a possibility the number of people attending congregational prayers in permitted mosques my be increased.

Munir also added that mosques may also be opened in stages in areas that have been categorised as green zones if the decline in the number of infections is consistent.

“To ensure that the situation recovers and Muslims can return to performing prayers in mosques, His Royal Highness urges the people to continue practicing social distancing, wear face masks and adhere to every instruction and guideline issued by the Health Ministry and Jais," said Munir. 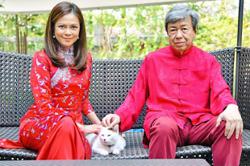