Be prepared to stay home longer

PETALING JAYA: With five days to go before the movement control order (MCO) ends, many are getting prepared for a possible further extension.

Discussions are ongoing at the government level on the issue, with the Cabinet having discussed various options yesterday.

A government source said there were discussions to open up more economic activities to enable industries to operate if the MCO were to be extended.

“The Cabinet meeting held yesterday discussed the possibility of an MCO extension beyond April 14, especially the opening up of more economic activities albeit in a controlled environment.

“Ministers were told to prepare for all possibilities pertaining to their portfolios accordingly as it was agreed that economic activities could not be kept stagnant too long.

“Ministries were told to prepare the standard operating procedures on operations during the MCO for the industries which come under their ministries.

“As for schools, it is likely to be more online classes for now, extended or otherwise,” said the source.

Bernama reported yesterday that the government would be “announcing the status of the MCO to the nation within 72 hours”, which is tomorrow.

Senior Minister Datuk Seri Ismail Sabri Yaakob said that although the second phase of the MCO would end in a few days, the government had yet to decide whether to extend it or not.

The first phase of the MCO, which began on March 18, was announced by Prime Minister Tan Sri Muhyiddin Yassin, and was further extended to April 14.

Senior Minister Datuk Seri Azmin Ali, who is also the International Trade and Industry Minister, said that the Health Ministry would recommend whether an extension of the MCO was needed.

“The Health Ministry has informed the Cabinet that they need to monitor the situation closely until April 10 before making any recommendations (to lift or to extend the MCO) to the government.

“As part of the National Security Council committee, I have yet to receive any notification up till now as to a meeting with the Prime Minister and NSC,” said Azmin yesterday.

The government had released economic stimulus packages for all, the latest being for the small and medium enterprises.

Rental exemptions and reductions were slated to allow businesses to remain at their current premises until June 2020.

Health director-general Datuk Dr Noor Hisham Abdullah said the Health Ministry needed “a day or two” before making recommendations to the government whether to extend the MCO beyond April 14.

According to the data released by NSC, there are currently 20 red zones in Peninsular Malaysia, with Selangor being the state with the highest number with 1,020 Covid-19 positive patients and the most red zones, which are areas with more than 40 Covid-19 cases.

Perlis is the state with the least number of cases at 17.

Society calls for special law to address disputes during MCO

MCO violators to be fined 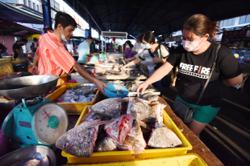