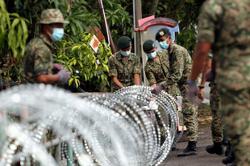 "We will start issuing the compound notice which comes with a RM1,000 fine starting today. We received the forms and documentation for the compounds last week," he told a press conference in Bukit Aman Wednesday.

He said that the compound would not be issued at the roadblocks, adding that MCO violators will be brought to the nearest police station or district police headquarters and it will be issued there.

"If the violators fail to pay the compound amount, they will be tried in court. They are given two weeks to settle the amount at any Health Ministry office," Comm Acryl said.

He reminded everyone not to take the decision to issue compounds lightly as it involves a fixed amount of RM1,000.

"There is no room for discounts once the compound has been issued," he said, adding that it is in accordance with the Prevention and Control of Infectious Diseases Act 1988.