Health DG: Ban on mass gatherings may continue even after MCO is lifted 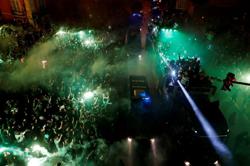 PUTRAJAYA: Malaysia may continue to ban mass gatherings for the rest of the year even after the movement control order (MCO) is lifted.

Health director-general Datuk Dr Noor Hisham Abdullah (pic) said Malaysians have begun adapting to new habits during the MCO, adding that this could be the new norm in the future.

“Although the national movement control order (MCO) is scheduled to end in two weeks, our practices have changed. It is not normal anymore. We do not shake hands, we frequently wash our hands and we keep our distance.

“The government will probably discourage mass gatherings for the next six months or one year, ” he said at a press conference here on Friday (April 3).

Prior to the implementation of the MCO on March 18, Malaysia already imposed a ban on gatherings of above 50 people - such as weddings, religious gatherings, sports events and concerts.

On Ramadan bazaars, Dr Noor Hisham said “e-bazaars” where food is delivered to homes instead can be a good alternative.

“We saw during the first phase of the MCO, the number of food deliveries has increased. This e-bazaar can be introduced as a means to avoid large gatherings of people, ” he said.

Health DG: Spike in Covid-19 cases expected due to active detection at hotspots