Water rationing to be carried out in Melaka after CNY

MELAKA: The state government has announced a scheduled water rationing exercise beginning on Wednesday (Jan 29) due to the ongoing dry spell.

Melaka Chief Minister Adly Zahari (pic) said rationing would only start after Chinese New Year celebrations, adding it would go on indefinitely until the situation improves.

"The rationing will only start after the Chinese New Year celebration," he said.

"I need the cooperation of locals to help conserve water and use rain water whenever it's possible," he said in a statement on Thursday (Jan 23).

Adly said the rationing next Wednesday would affect 62.8% of residential and commercial areas in Melaka Tengah, Alor Gajah and Jasin districts and would affect 550,673 individuals.

He said efforts were being made to ensure that water supply to the state dams in Durian Tunggal and Jus could be improved through the transfer or pumping of water from Sungai Gersik in Johor and Tasik Biru in Chinchin, Jasin, here.

In Sept 2018, several hotels and residential areas here were badly hit by a water shortage.

Murali said residents want to know whether the situation warrants a full water-rationing like what had happened in 1992.

A drought in 1991 and a mistake in monitoring the Durian Tunggal Dam level was blamed for the water crisis that hit Melaka in early 1992. Water rationing to end in Melaka on April 1 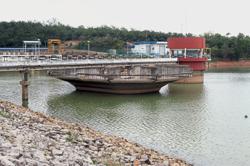 When it rains ... yes, it’s finally pouring in Melaka, but problems persist