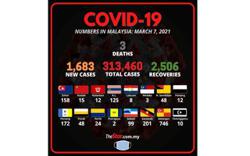 SINGAPORE (Bernama): Singapore sought assistance from the Malaysian law enforcement authorities to arrest more than 55 fugitives between 2016 and 2019, all of which were met.

It was done under the Section 121 Criminal Procedure Code (CPC), a longstanding reciprocal arrangement between Singapore and Malaysia to mutually recognise and execute warrants of arrest within their respective jurisdictions.

The fugitives were involved in serious crimes such as murder, housebreaking, and commercial crimes that had caused substantial financial losses amounting to more than S$120mil (RM360mil).

Reciprocally, the republic's law enforcement authorities arrested and transferred custody to Malaysian authorities, more than 25 fugitives in Singapore wanted by the Malaysians during this period.

One of the cases where Malaysian authorities had assisted its Singapore counterparts was the arrest in 2004 of a Malaysian national, Took Leng How, who had fled Singapore during investigations into the murder of an eight-year-old girl Huang Na whose body was found at Telok Blangah Hill Park.

The longstanding reciprocal arrangement has enabled Singapore's law enforcement authorities to secure the return of many criminals who had fled to Malaysia after committing offences in Singapore.

These were according to the Singapore Police Force (SPF) as part of its response to media queries relating to the transfer of custody of a Singaporean to the Royal Malaysian Police about five years ago.

The Singaporean on Jan 7,2020, was seeking an explanation from Singapore authorities about his arrest and "extradition" to Malaysia in 2015 over a charge made against him in a murder case in Penang.

Thus, SPF has decided to make clarifications "as there are widespread, erroneous assumptions" on what happened in the case. – Bernama