GEORGE TOWN: Expressing their displeasure at the way their memorandum was received by the state government, members of the Penang Fishermen Association (PFA) and representatives of local non-governmental organisations say they were treated better when they protested at Parliament.

PFA chairman Nazri Ahmad said he was displeased with the response as the fishermen were better received at Parliament and managed to express their woes and worries to a few MPs and ministers there, but were made to wait outside the state assembly here.

"It is unfortunate that we were not entertained and could only hand over our memorandum outside of the building.

"They need to know why we are opposing the reclamation project.

"They believe we are against development but that is untrue, we want the state to prosper, we are just opposing the reclamation project as it will be bad for fishermen and their livelihood.

"The destruction of the ecosystem here and the coast is the crux of our memorandum.

"We will continue to make the effort to come forward and approach them.

"We are disappointed that we were treated in such a way.

"We only wanted to meet an assemblyman or an exco member to speak to them about our plight, but instead, we were stopped outside the gate," Nazri said at a press conference outside Dewan Sri Pinang on Monday (Nov 4).

Nazri, who handed over the memorandum to information officer Zahar Zainul, said the project to create three man-made islands off the southern coast of the island will not only jeopardise their livelihood, but also destroy the natural ecosystem of the area.

"The Penang South Reclamation (PSR) project will affect the fishermen directly, like how the Tanjung Tokong reclamation project has affected the fishermen there," he said.

About 1,000 fishermen in Penang had gone on strike earlier in the morning to protest the proposed PSR project.

PFA members and representatives from local NGOs gathered at around 9am on Monday to protest at the Esplanade.

Nazri said they had obtained a permit from the police to hold the demonstration at Esplanade with strict conditions, including keeping the number of people below 1,000.

“We have more than 4,000 people who could attend the protest but to comply with the police conditions, we capped it below 1,000 to maintain peace, as we do not want to cause unnecessary tension, ” he said.

Penaga assemblyman Yusni Mat Piah from PAS then went out to meet Nazri and accepted another copy of the memorandum from him.

“I am here on behalf of the opposition, as the Opposition leader is currently debating the supply bill inside.

"I am here to assure the fishermen that the opposition will fight for their rights.

"We will bring up PSR during the assembly and oppose it.

“We can agree with the Penang Transport Master Plan, but not the creation of three islands that will destroy the ecosystem there and the livelihood of fishermen.

"Many Penangites will not be able to afford the houses on the three islands, so the project does not benefit the people as well, ” he said.

The PSR near Teluk Kumbar here is a massive plan to reclaim three islands measuring 1,800ha. 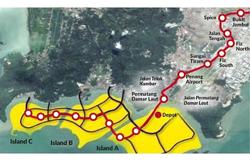