Police: IS will eye South-East Asia even more after Abu Bakr’s death

PETALING JAYA: Security forces in Malaysia remain on high alert for any terrorism threat in the country, especially after the death of Islamic State (IS) leader Abu Bakr Al-Baghdadi, police say.

The terror group, according to Deputy Comm Datuk Ayob Khan, will be more determined to set up a main base in South-East Asia, especially in the southern Philippines.

“IS will remain a dangerous group despite the loss of its leader and law enforcement agencies, especially the police, cannot afford to let their guard down.

“We have detected IS’ plan to set up a new caliphate in the region since the fall of their stronghold in Raqqa, Syria, in 2017.

While the police do not think that immediate retaliation will happen over Abu Bakr’s death, DCP Ayob said the security forces were more concerned about threats from lone-wolf attackers and self-radicalised militants.

“IS cells might not be getting orders from their central leadership in Syria and Iraq anymore but this will not stop lone-wolf attackers from striking.

“Collecting intelligence is very important to prevent such attacks,” he added. 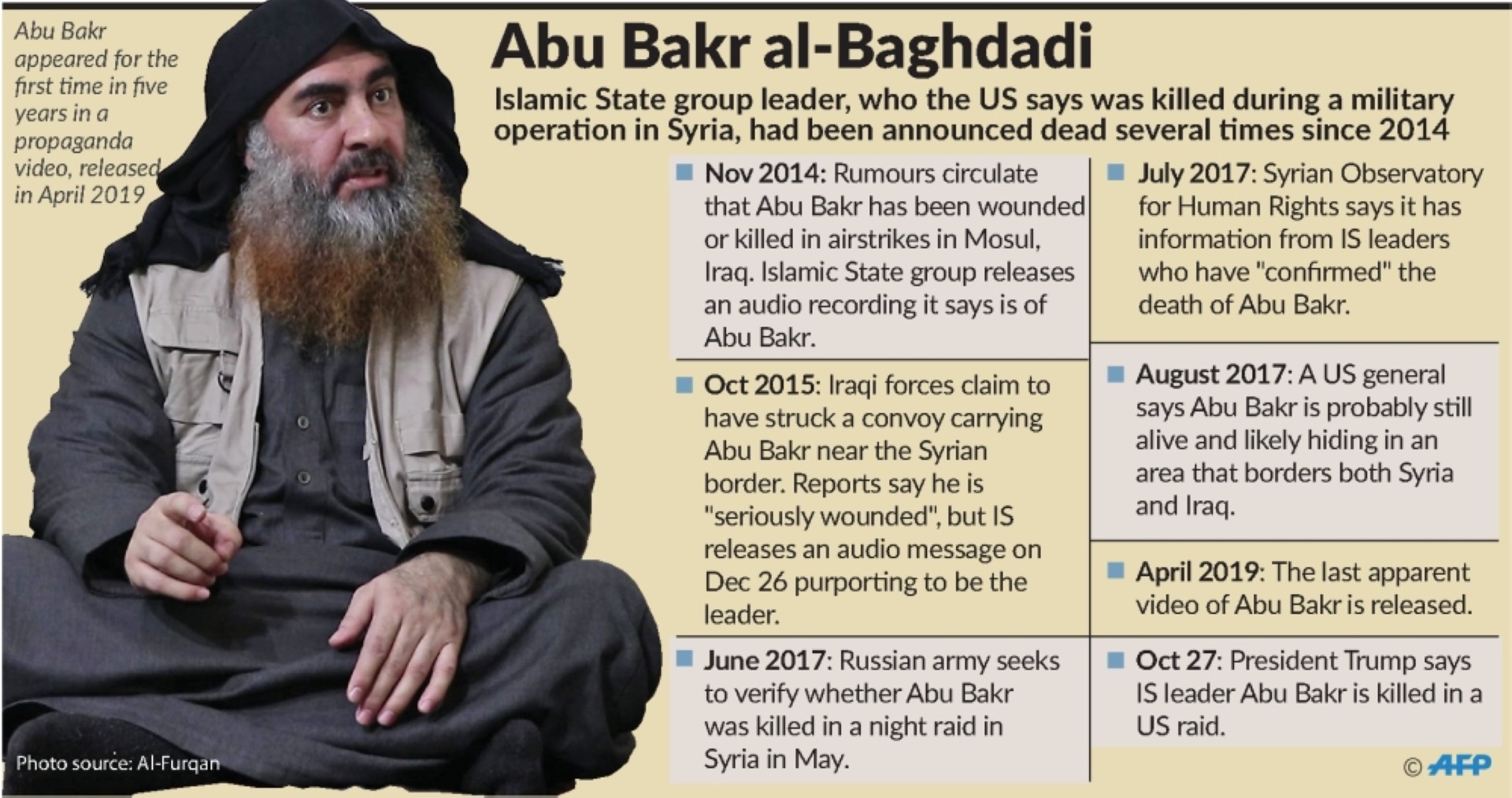 “As long as the ideology is not curbed, the threat of IS and other terror groups with similar ideologies will remain.

“It is the same when Osama bin Laden was killed, al-Qaeda continued to be a global threat,” he added.

He said intelligence agencies were also monitoring the spread of IS videos and teachings via social media and messaging applications.

“In the past, IS propaganda was spread via its official newsletter Dabiq. However, militants are resorting to applications such as Telegram to spread their videos,” he said.

Meanwhile, Dr Ahmad El-Muhammady, a political science lecturer at the International Islamic University of Malaysia, said Abu Bakr’s demise was a big loss to IS and there were fears it would regroup.

“IS will enter into hibernation to regroup and they will come up with new strategies. They will likely transform into a movement instead of an organisation.

“I believe his (Abu Bakr) demise has convinced foreign fighters even more that staying put in Syria is not an option. The push factor to leave is greater.

“There is a high possibility of reprisals, although it will not happen immediately.

“In my view, all security agencies in the region have to be on high alert for possible IS recruitment and operations.

“While they will not necessarily become more dangerous, the IS will be more creative in recruiting people and carrying out operations,” he said.

US President Donald Trump announced on Sunday that Abu Bakr was killed in a daring night raid by US special forces deep in northwest Syria.

Trump told the nation in a televised address from the White House that US forces killed a “large number” of IS militants during the raid which culminated in the cornering of Abu Bakr in a tunnel, where he set off a suicide vest, killing himself.
Article type: metered
User Type: anonymous web
User Status:
Campaign ID: 1
Cxense type: free
User access status: 3
Subscribe now to our Premium Plan for an ad-free and unlimited reading experience!