A file picture of a man walking past pigs in pens at a holding facility in Nanning, Guangxi province, China, on Sept. 16, 2019. - Qilai Shen/Bloomberg

The Department of Veterinary Services Sarawak (DVSS) in a statement Sunday (Oct 27) said this was after the DNA of ASF virus was detected in one of 17 canned pork luncheon meat imported from China in a test it conducted.

"Rest assured, so far no ASF infection in pigs has been reported in the state and the detection of the virus has not changed Sarawak's ASF-free status," it said.

It added that DVSS and other agencies would be conducting checks at all supermarket and affected products would be removed.

"Products in shipment will undergo "hold-test-release" mechanism to ensure they are free from ASF virus contamination," it said.

To date, the department noted that 220kg of animal products have been seized from travellers at all entry points and compounds have been issued for violation of the Veterinary Public Health Ordinance 1999. – Bernama 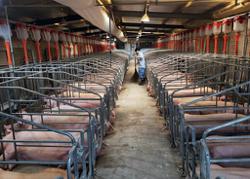