Girl, 11, dies as wooden house goes up in smoke

Firemen removing the remains the victim, Nur Hidayah Ramli, 11. The rest of her family managed to escape the fire which consumed their wooden house in Kg Pulau Melayu near Miri, Sarawak on Oct 23, 2019.

MIRI: An eleven-year-old girl died as a fire consumed a wooden house in Kampung Pulau Melayu at the outskirts of the city here.

Nur Hidayah Ramli, 11, perished as she was unable to escape the burning structure in the 4am incident Wednesday (Oct 23).

Fortunately, the rest of her family managed to escape to safety, including her grandfather, her parents and four other siblings.

Miri Fire and Rescue Department chief Supt Law Poh Kiong said they received an alert at about 4am.

Firefighters doused the flames and found the remains of the child in the debris.

The cause of the fire is being investigated. 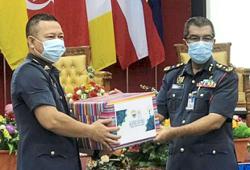