KUALA LUMPUR: Five individuals detained for alleged links to the Liberation Tigers of Tamil Eelam (LTTE), including the Gadek and Seremban Jaya assemblymen, have filed habeas corpus applications to challenge their detention under Security Offences and Special Measures Act (Sosma) 2012.

Ramkarpal, who is also DAP Legal Bureau chairman and Bukit Gelugor MP, said that the applications were made to secure their release from detention.

"Among the reasons cited in the affidavit is that the detention under Sosma was not done properly.

"Strict compliance of the law is necessary in every matter which deprives the liberty of subject. That is the base of the application," Ramkarpal told reporters after filing the applications.

"We are confident that based on the reasons we have submitted, we will have a good chance of succeeding in the applications," he said, adding that the lawyers have only been able to meet with the five individuals once since they were arrested.

In their affidavits, the five also stated that the use of Sosma is unconstitutional.

Arresting a suspect under Sosma allows police to detain suspects for up to 28 days at a time without trial.

Habeas corpus is a writ requiring a person under arrest to be brought before a judge or into court, especially to secure the person's release, unless lawful grounds are shown for their detention.

Saminathan and Gunasekaran were arrested on Oct 10 by personnel from the Bukit Aman Counter Terrorism Division, together with five other suspects following raids in Melaka, Negri Sembilan, Kedah, Perak, Kuala Lumpur and Selangor. 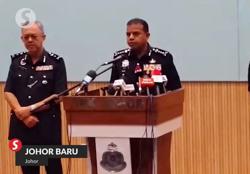