MIRI: There will be a notable absence of Sarawak government and party leaders from the state ruling party, Gabungan Parti Sarawak (GPS), at the tabling of Budget 2020.

No senior state government leaders will be going to the Dewan Rakyat in Kuala Lumpur for the Budget 2020 announcement by Finance Minister Lim Guan Eng on Friday (Oct 11) afternoon.

A check by The Star Friday morning showed that none of these parties were sending any of its top representatives to the tabling of Budget 2020.

Sarawak Chief Minister Datuk Patinggi Abang Johari Openg (pic), who is also GPS chairman and PBB president, is not going and is heading to Miri instead.

All GPS component parties leaders and state Cabinet ministers will be in Miri at 6pm to attend the official 83th birthday celebration of Governor Tun Abdul Taib Mahmud, which will be held here on Saturday (Oct 12).

Taib, Johari and the other Muslim ministers and GPS top brass will be at the Miri grand mosque for official prayers for Taib's birthday celebrations.

When asked, PDP deputy president Datuk Nelson Balang Rining said the state is not expecting to get much from Putrajaya in Budget 2020.

"No, we are not going to KL for the budget tabling. Looks like Putrajaya will not give much to Sarawak from the looks of things," he said.

SUPP information chief Adam Yii said SUPP was also not sending any of its top brass either.

PBB Wanita chief Datuk Seri Fatimah Abdullah said the Pakatan Harapan government had failed to deliver on their many promises of financial allocations to Sarawak as pledged during GE14.

"We do not see funds coming into the state. The best we can rely on is our own 2020 state budget that will be tabled in the state assembly soon," she told reporters in Kuching.

GPS parties, which were formerly part of the Barisan Nasional coalition, left shortly after GE14.

PM: We can’t meet all demands

Ringgit rebounds ahead of 2020 Budget announcement 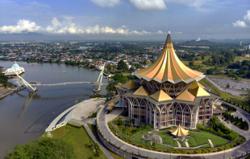