Looks like many Malaysians happy with Budget 2020, says PM

KUALA LUMPUR: The Prime Minister believes many Malaysians will be happy with Pakatan Harapan's Budget 2020.

"Looks like many people will be happy. Almost everybody gets something," said Tun Dr Mahathir Mohamad at the press conference after the Budget was tabled in Parliament on Friday (Oct 11).

Dr Mahathir said despite having to repay the nation's debt, the country's economic performance still managed to improve.

He said economic growth for this year stood at 4.7% and likely would go up to 4.8% next year.

"Many may feel that the Pakatan government has no experience and may not be able to govern the country well.

"But from what we heard (Budget speech), allocations were increased to all parties and this shows that our financial position is still strong," he added.

Dr Mahathir said the country did not have non-performing loans.

He said that the Finance Minister had also prepared a sound Budget that reflected the strength of the nation's administration.

The Prime Minister also expressed confidence that the country's credit ratings were "very good" as people had come forward to offer funds for Malaysia to borrow.

"But, of course, we have to borrow from the best offer, and Samurai bonds will attract interest rate of 0.5%," he said, when asked if Putrajaya was concerned about the credit ratings following higher Budget allocations and the issuance of a second Samurai Bond.

It was reported that the government was expected to issue Samurai bonds early next year, with the issuance size to be determined after discussions with the Japan Bank for International Cooperation (JBIC).

The bond offer is said to come with an even lower interest rate of less than 0.5% compared with the previous rate of 0.63%.

Asked if Panda bonds (renminbi-denominated bonds sold in China) would be issued, Dr Mahathir said "not at the moment".

The proposed issuance of Panda bonds are meant to assist Malaysia in its financial woes.

However, Lim reportedly said that the bonds were still not attractive enough, price-wise for Malaysia at the moment. 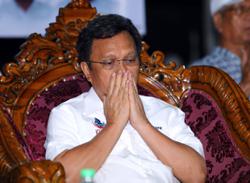