KUALA LUMPUR: The corruption trial involving Umno supreme council member Datuk Seri Abdul Azeez Rahim and his brother, Datuk Abdul Latif Rahim, set to start on Wednesday (Sept 25) at the Sessions Court here has been postponed, with the prosecution application to transfer the case to the High Court.

Deputy Public Prosecutor Nik Haslinie Hashim informed the court that the prosecution had filed a notice of motion before the High Court registrar office on Sept 19.

She added that there was no objection from the defence. She then requested that the court change the trial date to a case mention.

Counsel Hisham Teh Poh Teik, representing both Abdul Azeez and Abdul Latif, confirmed that they had no objection to the prosecution's application to transfer the case to High Court.

Judge Azura Alwi then fixed Oct 2 for the next case management date.

Judge Azura also asked the prosecution to update her on the latest development of the application.

“We can start the proceedings after you attend the case management at the High Court, ” she added.

On Jan 16, Abdul Azeez, 52, was slapped with three counts of graft amounting to RM5.2mil and nine charges of money laundering amounting to RM139.3mil.

For the three graft charges, the Baling MP was accused of receiving RM5.2mil in kickbacks from Menuju Asas Sdn Bhd director Mohammad Redzuan Mohanan Abdullah as a reward for helping the company obtain road projects.

The first charge accuses of receiving kickbacks from Mohammad Redzuan between December 2010 and April last year (2018), as an inducement for the company to obtain RM197.8mil worth of road projects in Kedah and Perak from the government through direct negotiation and selective tender.

The second and third charges accuse him of receiving RM4mil in two transactions of RM2mil each from the same person as a reward for assisting the company to obtain road projects worth RM842.2mil through limited tender from the Works Ministry.

The offences were allegedly committed at CIMB Bank, Jalan Tun Perak in Kuala Lumpur on Dec 8,2010 (for the first charge) and Affin Bank, Pusat Bandar Puchong in Selangor on June 13,2017 and April 10,2018 (for the second and third charges).

The three charges against Abdul Azeez were filed under Section 16(a)(A) of the Malaysian Anti-Corruption Commission (MACC) Act 2009.

As for the money laundering charges, he was alleged to have received proceeds through unlawful activities totalling RM139.4mil from several companies between March 2010 and August 2018.

All the offences were allegedly committed in the Klang Valley between March 8,2010 and Aug 30,2018.

The charges were filed under Section 4(1)(b) of Anti-Money Laundering, Anti-Terrorism Financing and Proceeds of Unlawful Activities Act (AMLATFPUAA) 2001, which provides an imprisonment for up to 15 years and fine of not less than five times the value of the proceeds obtained or RM5mil, whichever is higher, if found guilty.

Meanwhile, his brother Abdul Latif was accused of abetting him on two counts of obtaining the RM4mil bribe in two transactions of RM2mil each from Menuju Asas, between June 2017 and April last year (2018).

The charges, under Section 28(1)(c) of the MACC Act, carry maximum 20 years’ imprisonment and a fine not less than five times the sum or value of the gratification or RM10,000, whichever is higher. 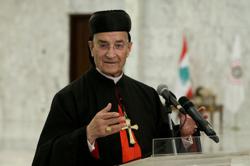 Lebanese patriarch warns of 'multiple dangers' without a government